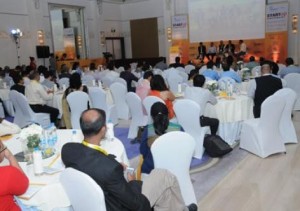 Bangalore, 29 Oct 2015: The StartUp Capitals Conference on Celebrarting Global Hotspots of Innovation held at Bangalore on 29 Oct 2015 had some interesting deliberations & views from the delegates.
The Key Note Speaker Mr. Shashi Chimala,Exec.VP,National Entrepreneurship Network said that “Entrepreneursip is like a Game of Thrones, most of us get thrown out of the Game right from the start. We need to develop the right mindset to be successful.
He said “The core of being an Entrepreneur is freedom, one need not be rich to do that, ideas and innovation is all that it takes for a StartUp to arrive. Just a few years ago, no engineer in India ever thought that he can be on his own. While there always were role models like Bill Gates and Steve?Jobs, they were far from what the Indian youth could relate to on a personal level,” he said.”

Speaking on the ocassion, Anuradha Goyal, the author of the book The Moust Charmers said, “Start-ups have now become a glamour quotient in India which was not the scene even a few years back. Being an entrepreneur is somewhat glamorous, but there is a need for honest and genuine ideas rather than doing something that is already there”. She added that  “There is also a need for proper guidance to the budding entrepreneurs. People who have successfully established start-ups should come forward and guide them for a prosperous start-up eco-system.”

At the Panel Discussion on the topic ‘Bangalore’s startup system -Growing it beyond the city’, Alok Bharadwaj, Founder of Hidden Reflex said that Bangalore has got all the wherewithall to nurture crazy ideas, where it may score low is Infrastructure. This should be the focus of India in the next decade, to support the ecosystem with good infrastructure, he said.

Start Up Capitas is a thought-leadership conference that celebrates the innovation/startup ecosystem of cities that are making a mark on the world map. It brings together all the stakeholders in a startup ecosystem, including entrepreneurs, business leaders, innovators, researchers and educational specialists, government leaders and venture capitalists, under one roof who champion innovation and who are passionate about taking their innovation ecosystem to the next level.

Vishwesh Iyer, Co founder of Startup Capitals & Managing partner of Business Excellence & Research Group (BERG) Singapore said “StartUp Capitals gives young innovators a chance to hear and interact with the thought-leaders and entrepreneurs who are leading the change in the world and who are committed to making the world a better place. The confererence series in India would be held at Mumbai, Kolkata & Hyderabad in 2016, in addtion to New Delhi & Bangalore this year”, he added.